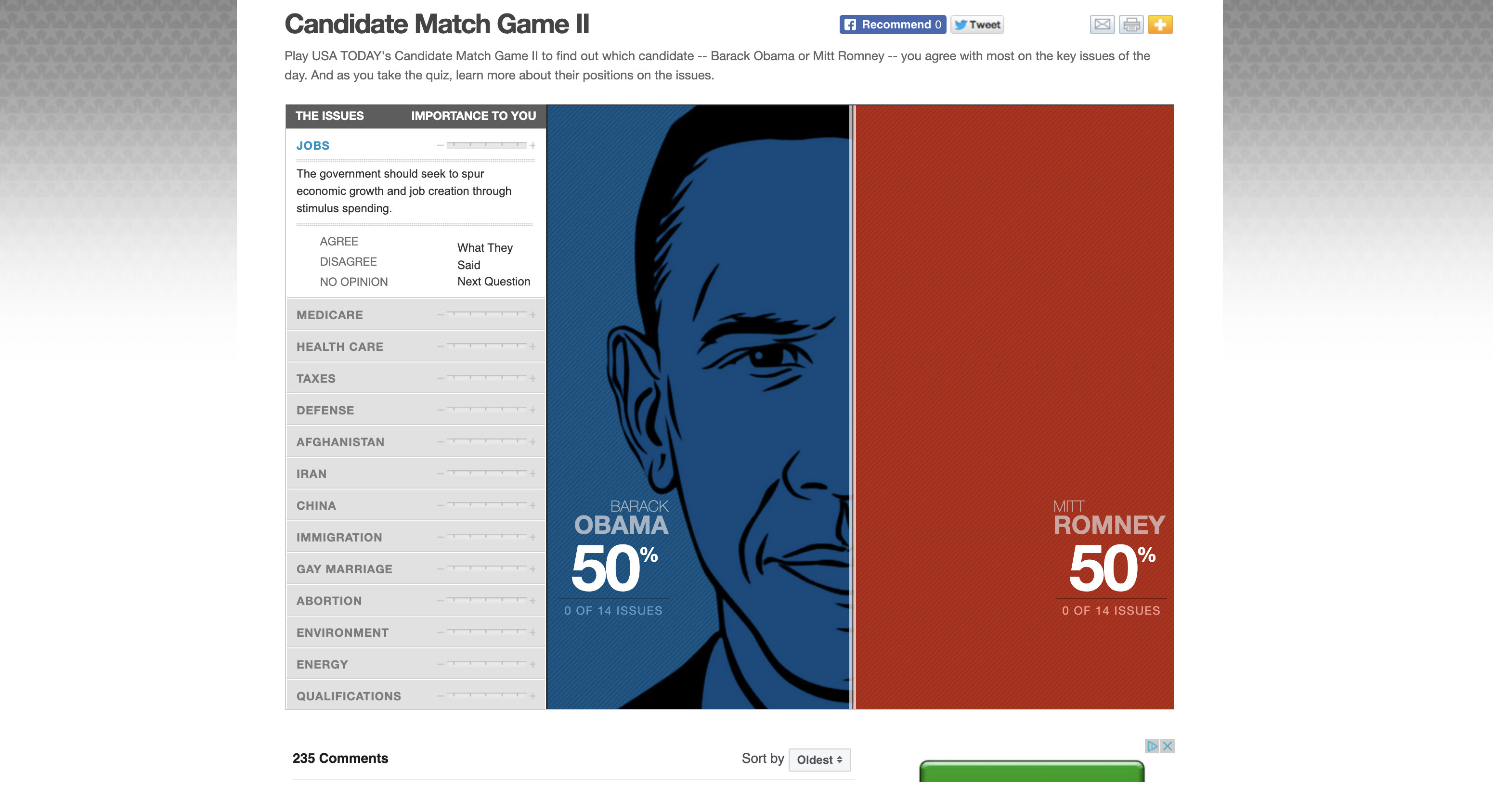 Candidate Match Game allow players to rate importance of issues that would determine which political party aligns with your point of view. Issues range from jobs, medicare, enviornment, taxation, immigration, to gay marriage...etc. Players are given the opportunity to address their point to views and evaluate which candidate-- Barack Obama or Mitt Romney has more similar views to ours and is more fitted for the role of President of the United States of America. 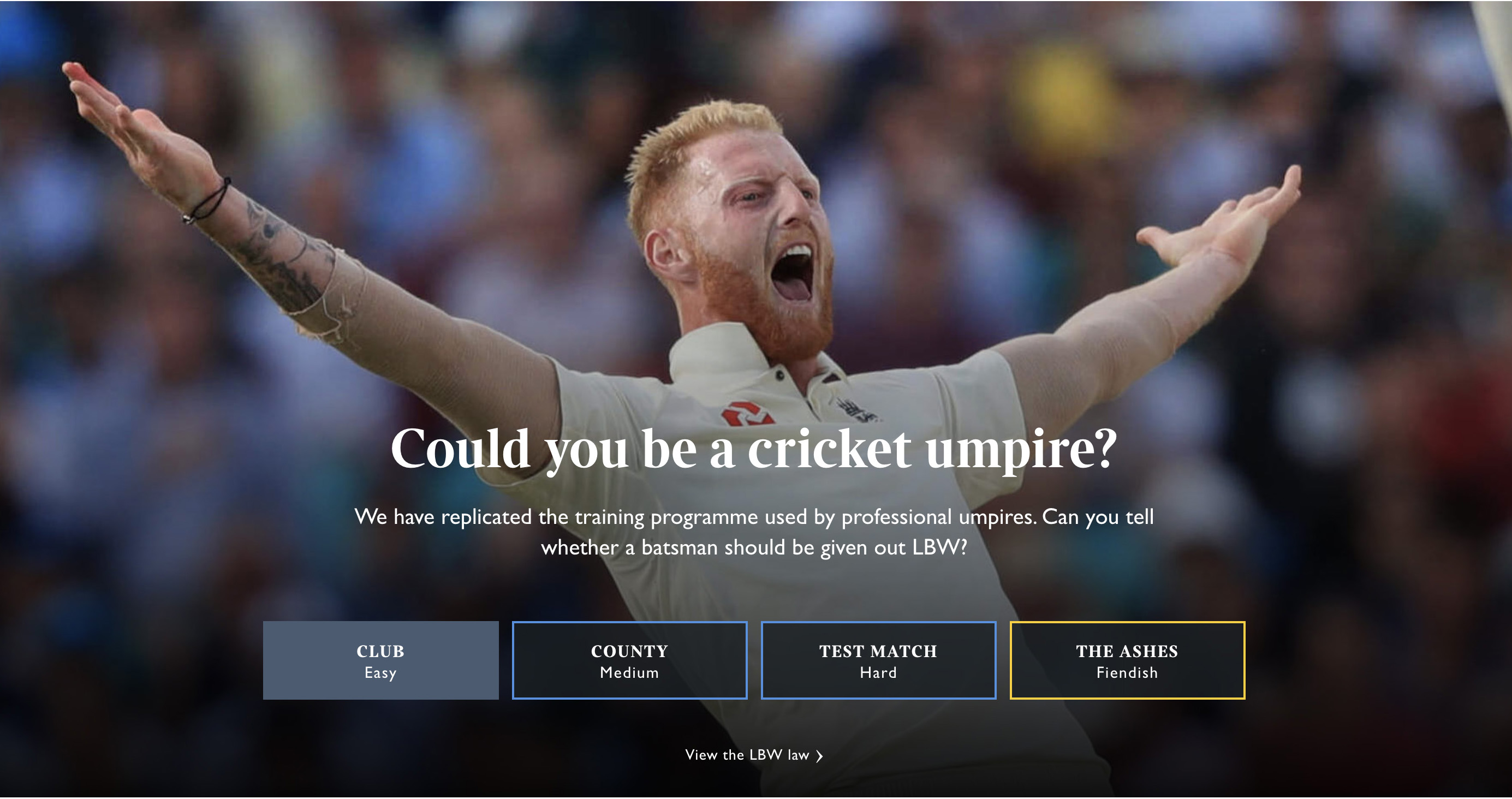 Could You Be A Cricket Umpire challenges players to be the cricket umpire. There are four levels of difficulties for players to choose from. The game begins by showing videos of a ball thrown at the batsman. The objective of the game is to judge correctly if the ball is in or out. Players get 5 seconds to make this decision. 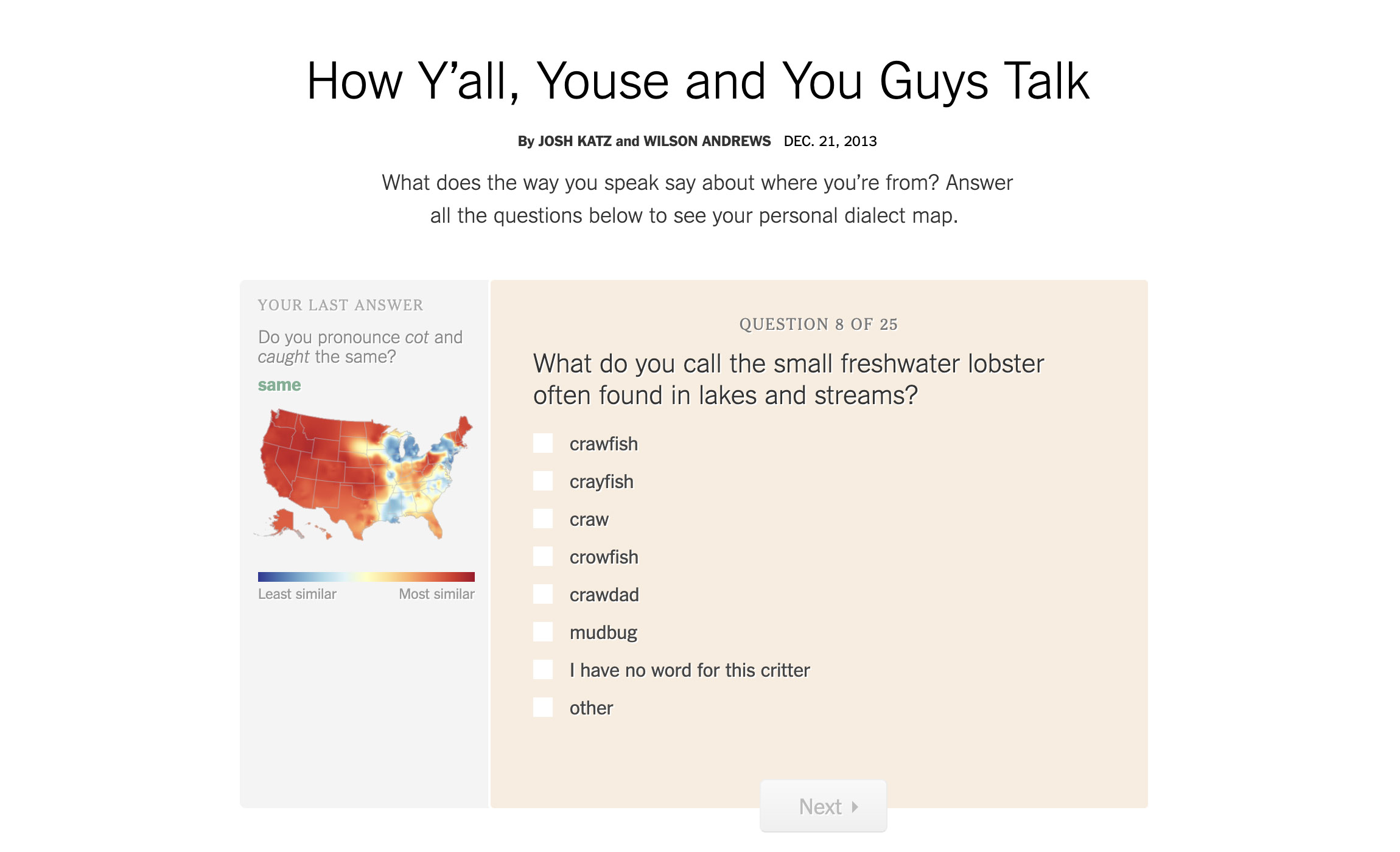 How Y’all, Youse and You Guys Talk is a quiz that displays the diversity of American regional dialects. Composed of 25 questions, the quiz is based on data collected from over 350,000 survey responses. Once you answer a question in the quiz, a heat map of the US will show regions where your answer is most similar or least similar to. After answering all of the questions, the map will locate 3 cities where your lingo is prominent. 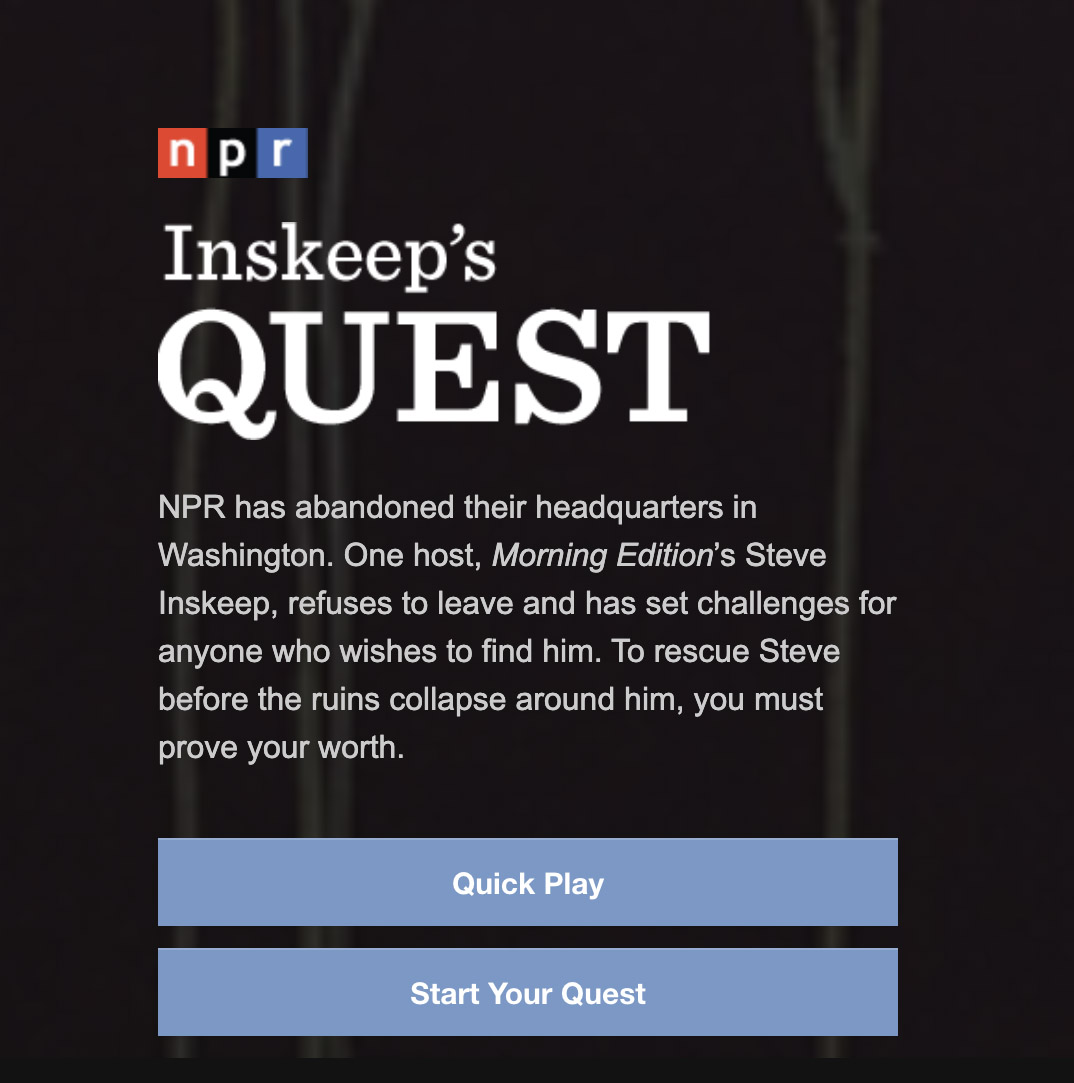 With most of the game’s narrative stated in the opening page, Steve Inskeep, a host from NPR has gone missing and is in danger. It is the players job to take this “Inskeep’s Quest,” an audio-driven quiz that will help save him. The questions in the quiz are delivered in the audio format. Players must listen to the news content presented and identify the year that the event took place. With a total of 4 questions, speed and accuracy in answering the questions will help players achieve Inskeep’s Quest. 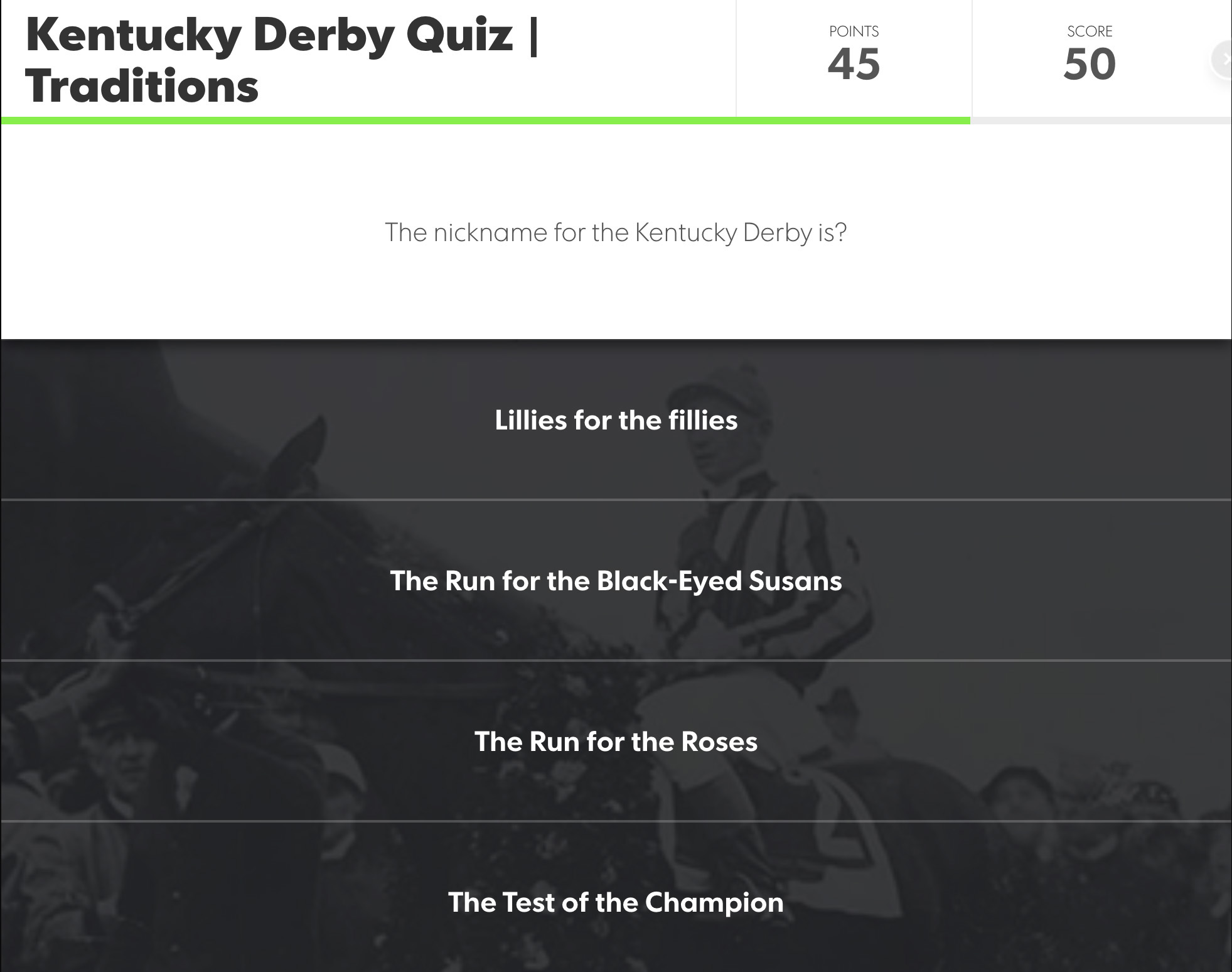 Order! Order! Could You Be A Speaker is a short quiz that challenges players to judge the right or wrong scenarios being shown. Once you answer, the screen will reveal the right answer. It will also display data percentage on how much of readers got it correct, providing players an understanding of rules inside the House of Commons. 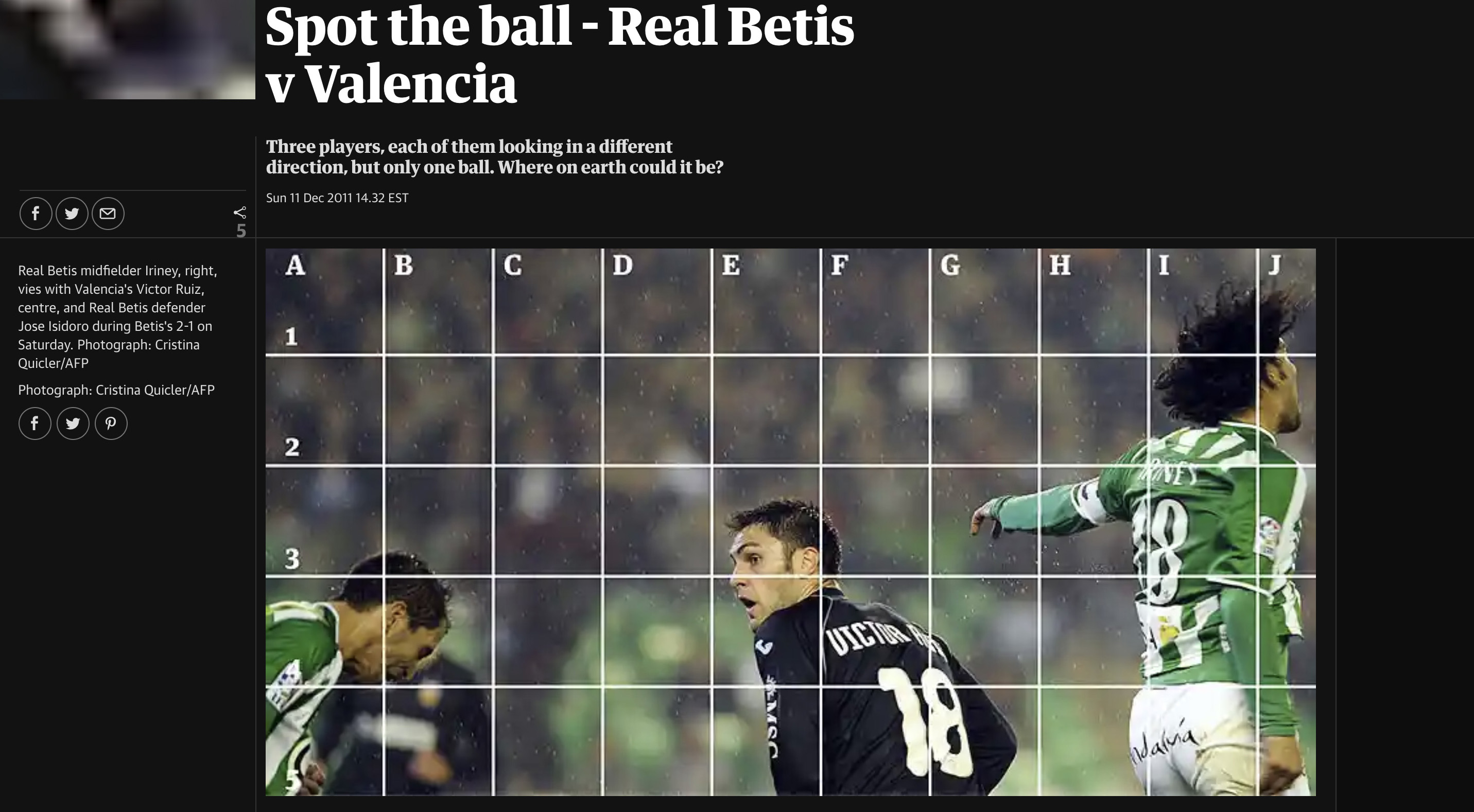 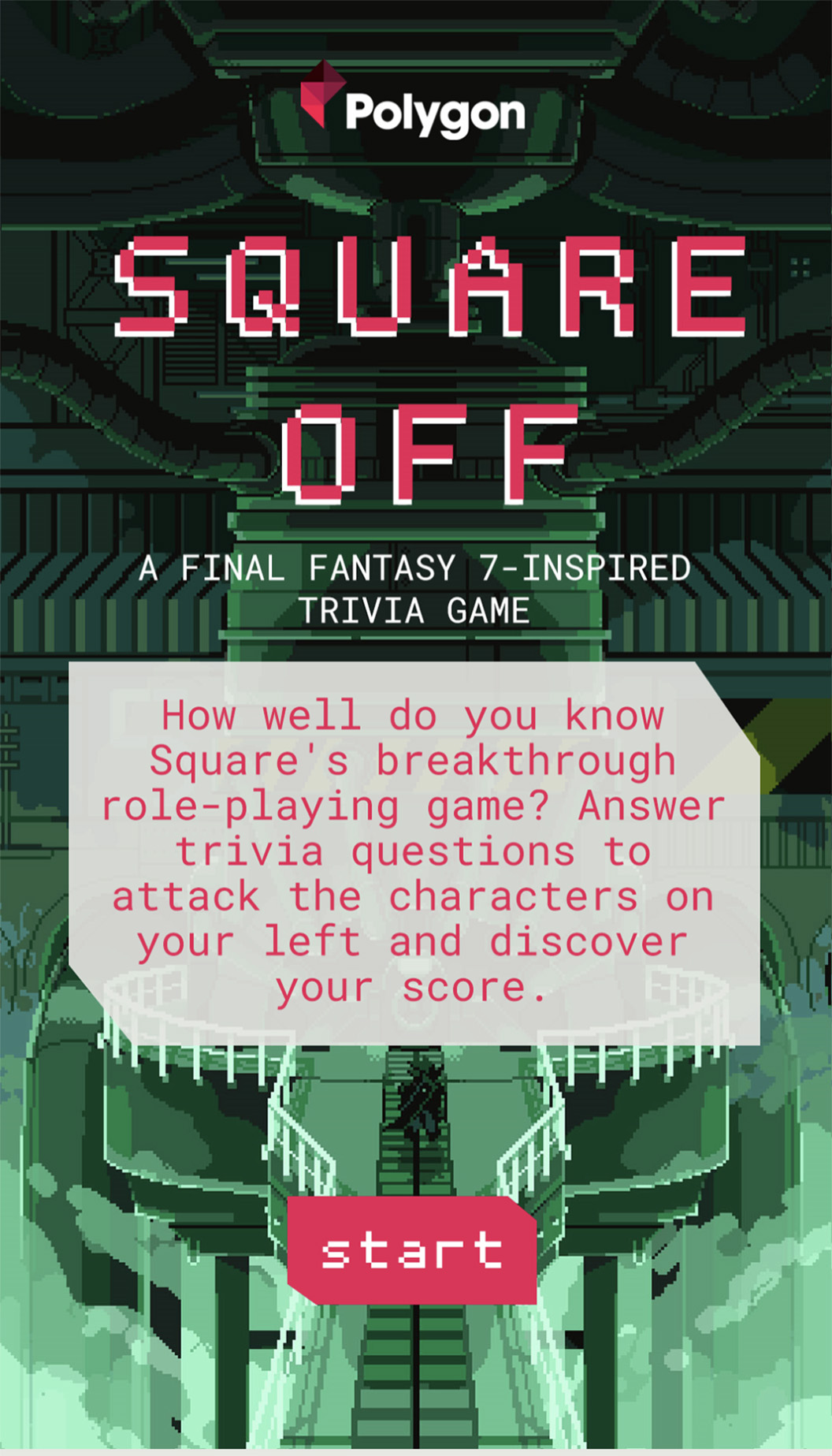 A tribute to Final Fantasy 7, this game is based off of interviews with 35 individuals who were associated with the game's development team. After months of research and surveying, Final Fantasy 7— an oral history was published. Square off: A Final Fantasy 7- inspired trivia game used those information as the framework and question game players in a multiple choice format. The objective of the game is to challenge players knowledge of Final Fantasy 7's game development, lore and culture. 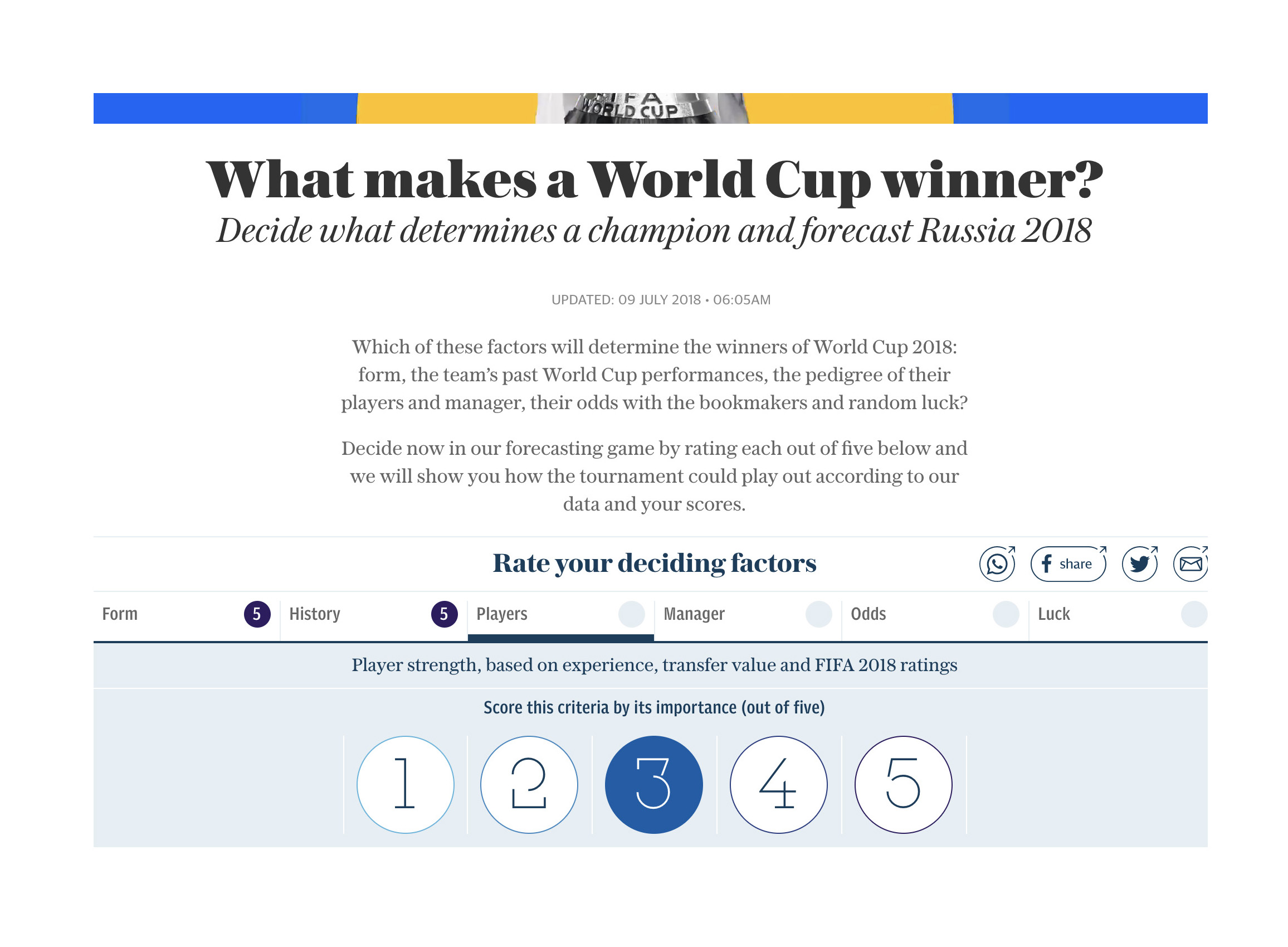 What Makes A World Cup Winner is a forecasting game that allows players to rate their deciding factors on form, past World Cup performances, the pedigree of the players and manager, odds with bookmakers and random luck. Rate the factors and run the simulation to see if the team you're rooting for will make it to the top. 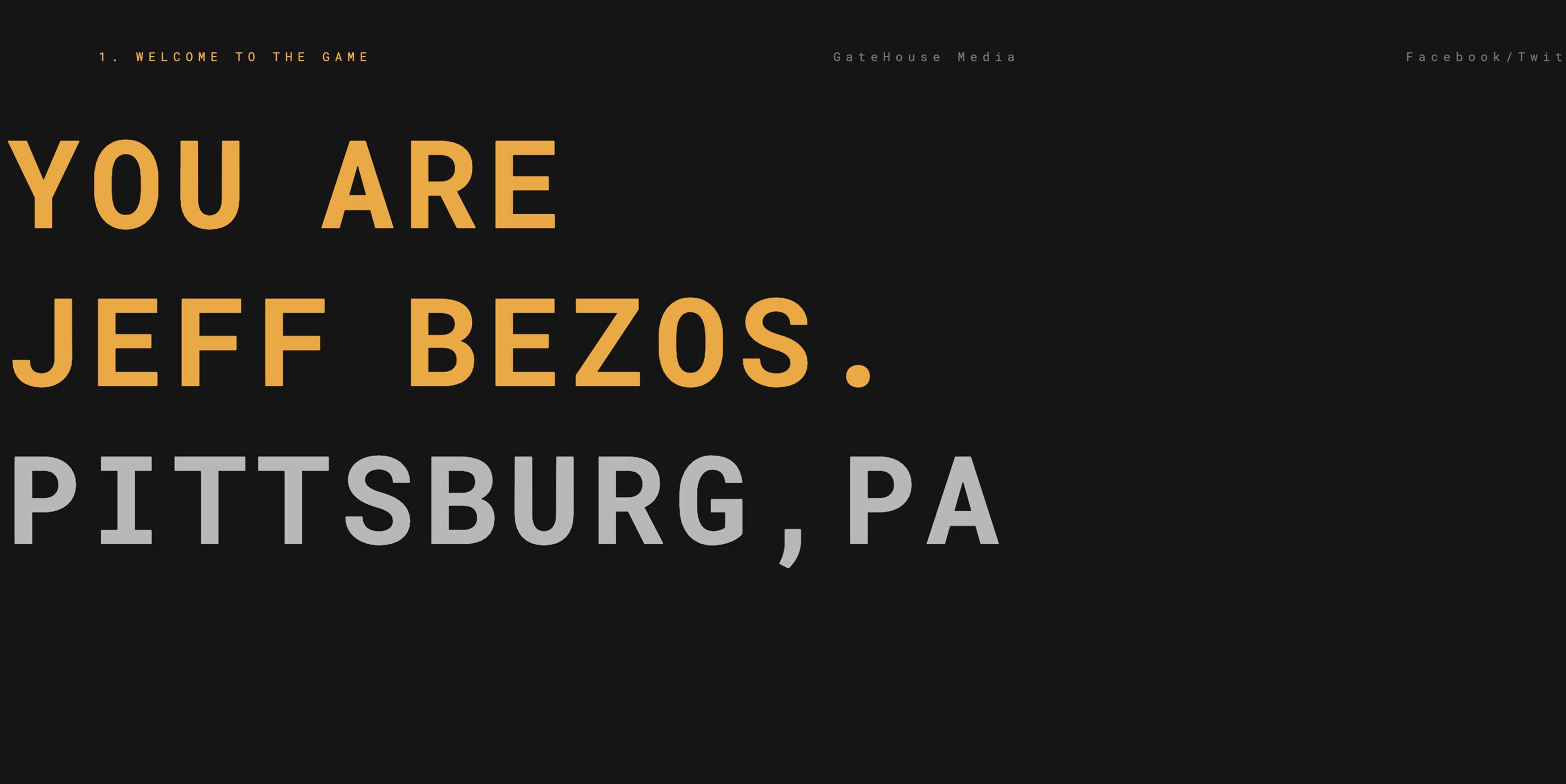 Amazon's HQ2 is opening soon, players will get the chance to evaluate different factors of work life to help decide where the new HQ2 should be located. By evaluating key interests such as, culture and business climate, economic and incentives, labor force, quality of life, sustainability and green energy, travel and commute, wireless and broadband connectivity, a suited location for HQ2 will appear at the end of the game and explain why that location is an ideal choice.