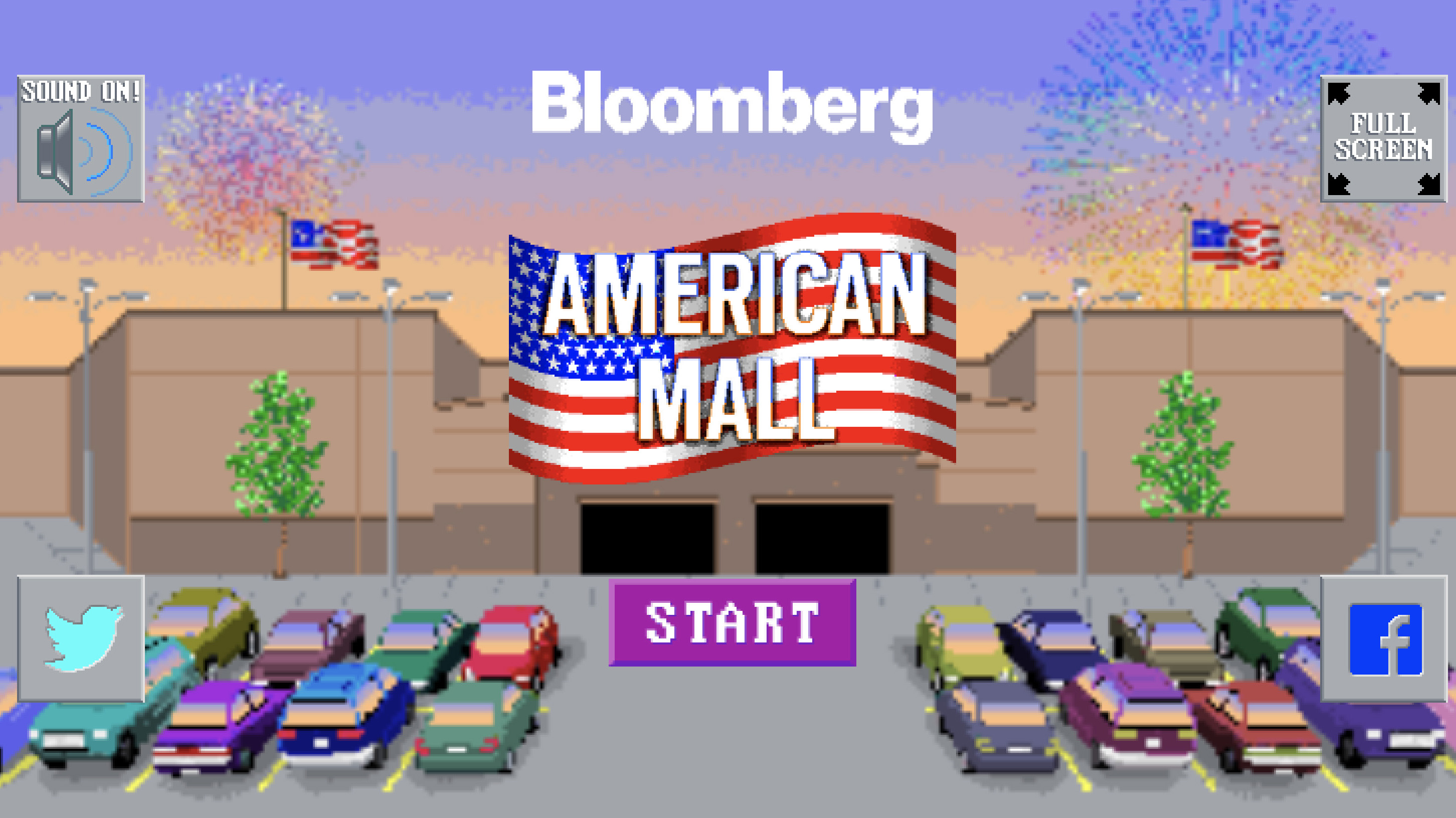 Many malls in America are now facing trouble of closing down due to the rise of ecommerce stores. The objective of this game is to manage a mall such as collect rents, lowering rental fees for financially troubled stores, keep cyberpunks out of the mall, or complete micro quests such as piercing ears, making sandwiches or blocking frenzied Black Friday shoppers...etc. Play and see if you can maintain the happiness level for everyone who is involved in the business. 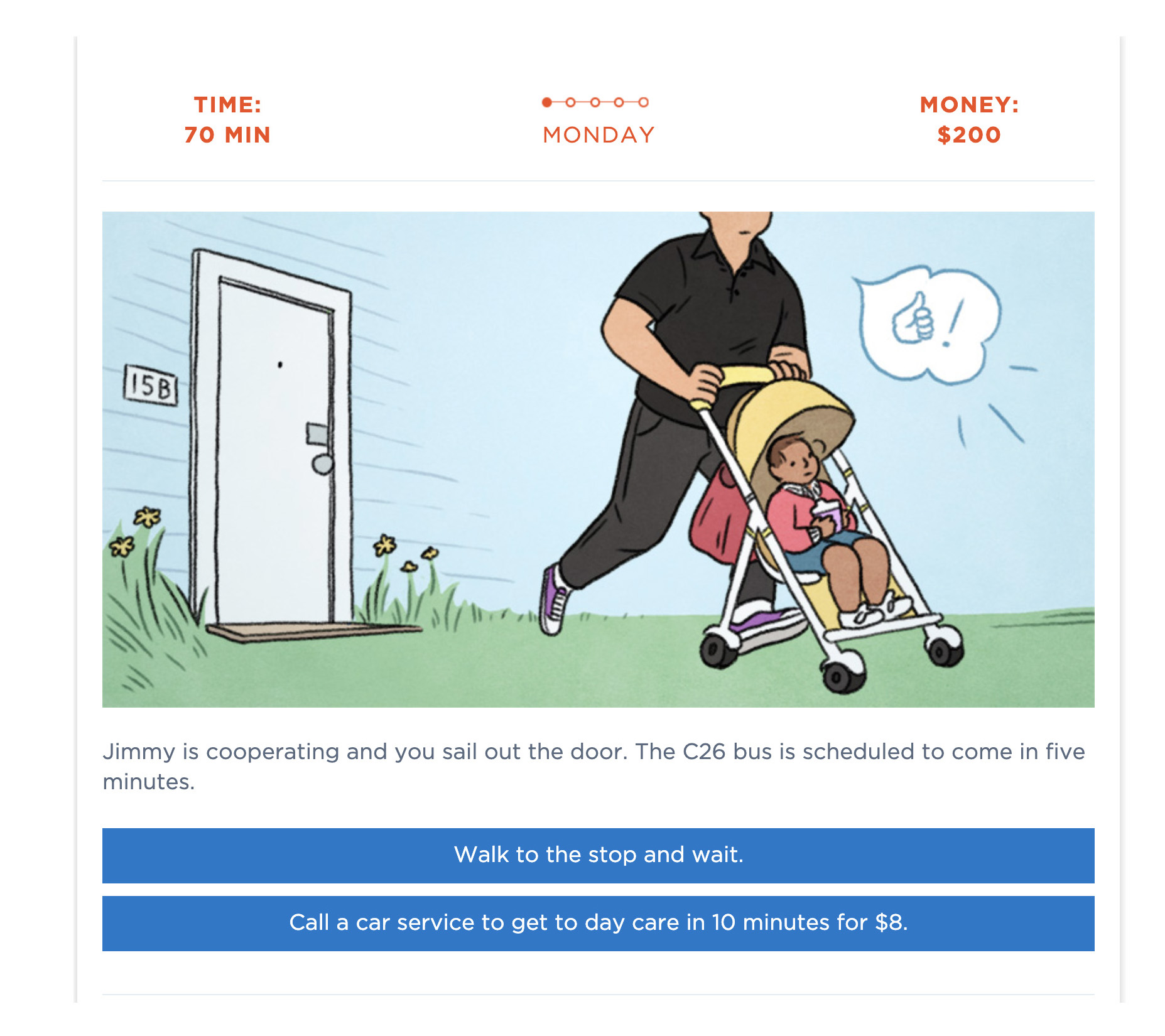 Commuter Challenge allows players to experience a day into the lives of individuals who take public transportation regularly. As game players, we're asked to help make decisions for the protagonist to consider other factors in his/her daily routines such as picking up or dropping off children ad budgeting so he isn't late to work and get fired. The goal of the game is to let the public understand how dependent certain people are of the public transportation systems in order to go through their days smoothly. The game fosters engagement and allows game players to empathize with the character. 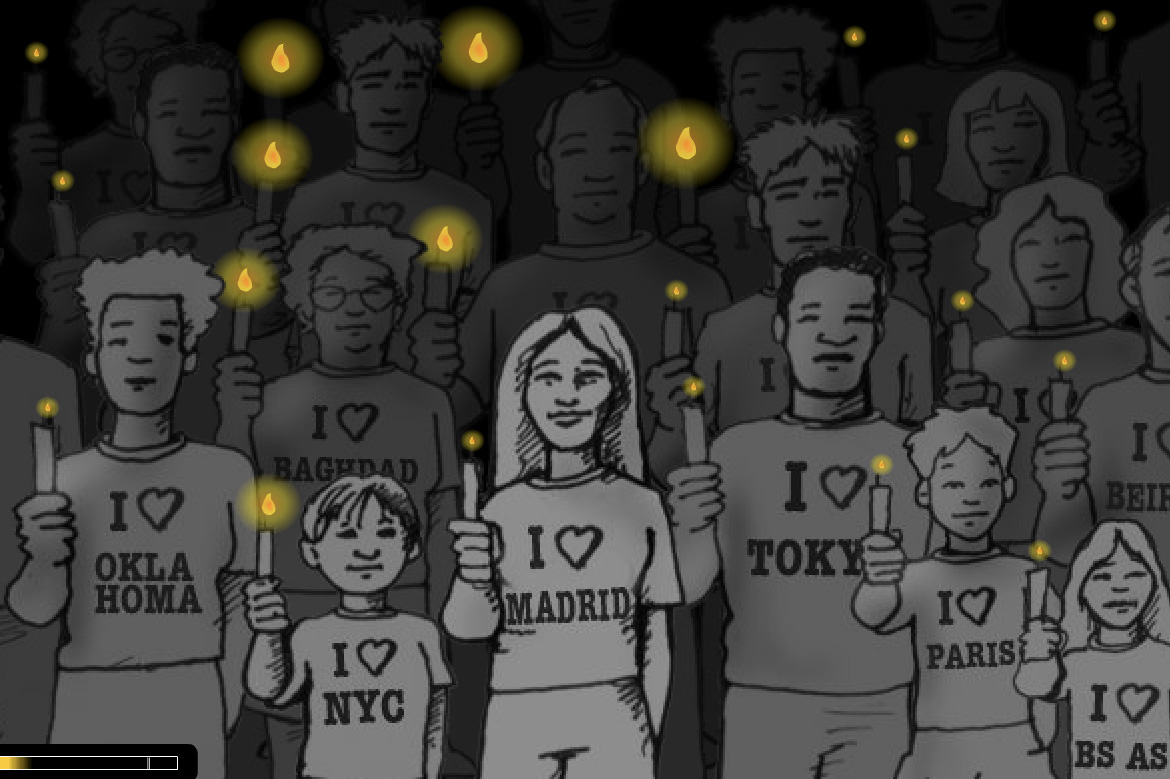 The goal of Madrid is to pay homage to the victims of the Madrid terrorist attack. The game reaches the emotional side of the story and encourage players to keep the candles lit at all times. The emotional aspect isn't usually present in newsgames and Madrid exemplifies this by allowing players to interact. 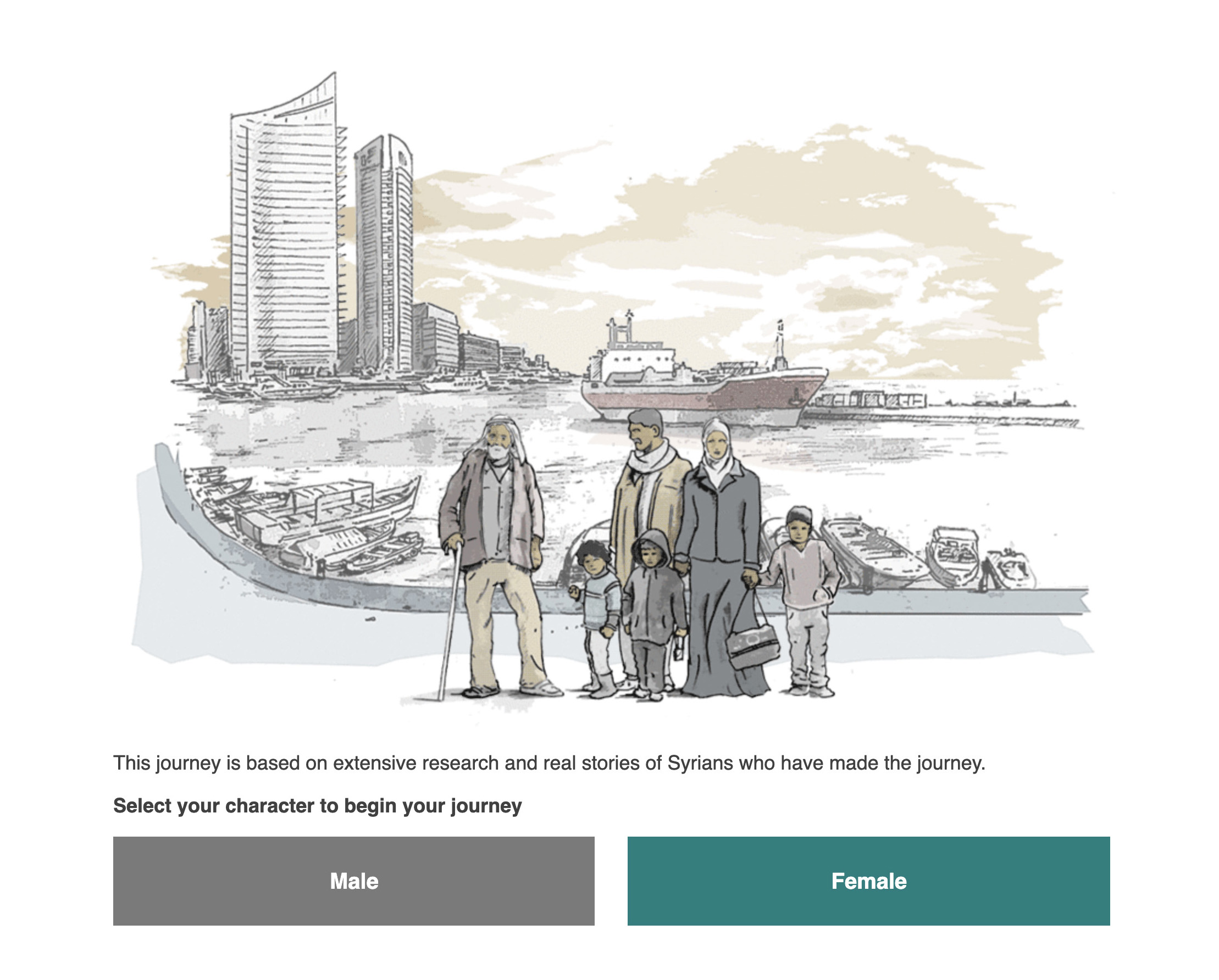 The Syrian Conflict has forced many Syrians to flee their home country due to the violence and political turmoil. Many risk their lives to seek refuge in neighboring countries, and some pay traffickers to take them to Europe. However, the uncertainty of their journey may result in safety, capture, death or deportation. The game's routes, options, and outcomes are based on interviews with real stories by BBC Arabic digital project.

The Refugee Challenge: Can You Break Into Fortress Europe? 1/14/2014
The Gaurdian 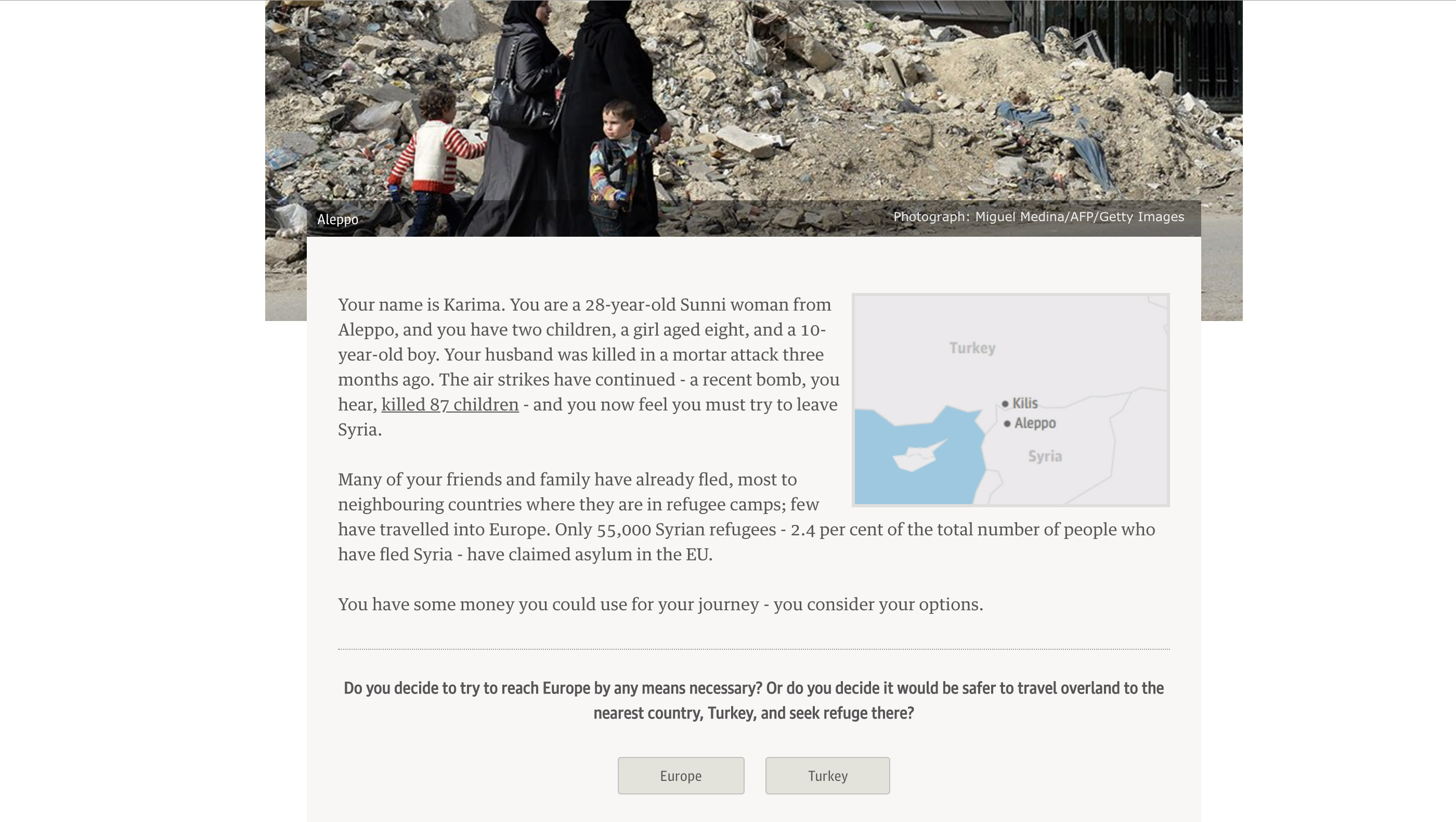 The Syrian refugee crisis has caused many of Syrians to flee their home country due to the ongoing civil war that started in 2011. Citizens of Syria live in constant fear knowing that their home is not safe and can be destroyed any second. Many people decide to leave everything behind and seek refuge in search for safety. However, the escape does not guarantee a better life. In this choose-your-own-adventure game, videos of real-life interviews with Syrian refugees show mistreatment, suffering and poor living conditions they encounter. The game allows players to shift their perspective and understand the complexity of the Syrian Refugee crisis.

Two billion miles is the estimate of all the miles traveled by Refugees in 2015. Many made the choice to flee their home countries because their homes have become uninhabitable, dangerous with limited opportunities for a better life. The game allows players to make life-changing choices for the characters in the game.